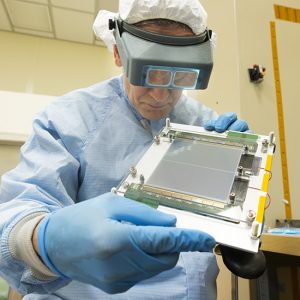 The CMS outer tracker will measure, in conjunction with inner pixel system, the trajectories of charged particles and by extension their momenta. Designed for the high-luminosity phase of the LHC program, the outer tracker will consist of six barrel layers and 5+5 endcap layers, where each layer contains modules consisting of two silicon sensors. With separations ranging from 1.6 to 4 mm, the sensor-pair modules will provide inputs to the L1 triggers. That is, the HL-LHC outer tracker will be able to single out beam crossings in which there is at least one track with a transverse momentum in excess of 2 TeV and associate physics objects such as electrons and muons with the high transverse-momentum tracks. With over 13,000 modules, the new OT detector will completely replace the current strip tracker and will be expected to operate for 10 years without replacement or the possibility of access.

The Fermilab Outer Tracker Group is making preparations for assembling and testing over 1,250 PS modules and 1000 2S modules. A similar number of OT modules will be built and tested by a collaboration of Brown, Princeton, and Rutgers. Other participating institutions include Bethel, Davis, Iowa, Mississippi, Purdue, and Wayne State. The production period will run for about two years and will include wire bonding, fast testing of individual modules, and overnight burn-in of sets of 10 modules. The US will also oversee the commercial flip-chip bonding of the PS macro-pixel assemblies.

All of the 2S modules and many of the PS modules produced in the US will be shipped in individual containers to CERN for installation in the OT support structures. 952 PS modules will be installed by the Fermi group on planks and the planks installed on hoops to comprise the flat barrel portion of the OT PS system. The planks and plank layers will be extensively tested at Fermilab, including the use of bi-phase CO2 cooling. The testing including noise studies is necessary to insure that the modules will function without direct intervention for the expected 10-year running period. 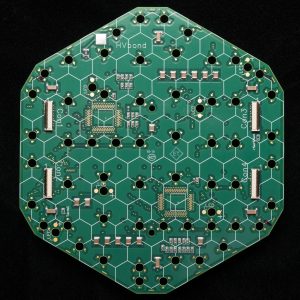 The HL-LHC will deliver 10 times more integrated luminosity than the LHC with up to 200 collisions in every bunch crossing. To cope with this, the large radiation levels and high occupancies, the endcap calorimeter of CMS (see photo) will be replaced with a high-granularity calorimeter (HGCal).

The calorimeter measures the energy of incident particles by stopping them in dense absorbers made of lead or stainless steel and by measuring the amount of energy released in a form of a shower of secondary particles and radiation. The energy of showers is sampled with sensor layers inserted in between the absorber layers.

The HGCal will have a total of 50 sensor layers made of silicon planar diodes in high-radiation areas and plastic scintillators with silicon photomultipliers (SiPM) in the low-radiation areas. It will have 620 square meters of silicon sensors, the largest amount in a detector so far, and 400 square meters of scintillators. The size of the silicon channels will be 0.5-1 cm2, amounting to 6 million channels in the detector, and the readout electronics will dissipate 125 kW of power per endcap. To extend the lifetime of silicon sensors, the HGCal will be operated at a temperature of -35 degrees C using a two-phase CO2 cooling system.

The front-end electronics will measure not only the amount of deposited energy but also the time of arrival of the incident particle with a precision of 25 ps. As a result, HGCal will allow researchers to track the development of showers in space and time, with unprecedented precision, and will allow scientists to resolve individual showers in the busy environment. The imaging capabilities of the calorimeter will play an important role in the particle flow algorithm used for the event reconstruction in CMS.

Fermilab is playing a significant role in the R&D and design of the HGCal and will host both a scintillator Tile Module Assembly Center and the Cassette Assembly Site for the final integration of the detectors into cassettes. The Silicon Detector (SiDet) Facility at Fermilab provides the infrastructure for characterizing the silicon sensors and it will also be the Cassette Assembly Site during the production phase. Silicon sensors built into modules are sent to Fermilab for testing at the Test Beam Facility for their response to incident particles. Modules are mounted on copper cooling plates to form cassettes, which will be inserted into the absorber structure in CMS. Prior to shipping the cassettes to CERN, the thermal performance of the system will be studied using the CO2 cooling system available onsite.

Fermilab is also playing a leading role in the overall design of the HGCal readout electronics system with specific responsibility for the design and fabrication of two novel integrated circuits (microchips) required to readout the HGCal. For example, because of the immense data volume associated the 6 million HGCal sensors, it is not possible to read out all data at the 40 MHz LHC collision rate. Thus, the HGCal requires a custom, radiation-tolerant integrated circuit to perform the first stage of data selection and compression on detector before transmission to the off-detector electronics. These integrated circuits are being designed, fabricated and tested by Fermilab physicists and engineers in the Fermilab ASIC Development Group.

Reconstructing remnants of interactions at collider experiments traditionally relies on measurements of particle’s energy (p, E) and position (x) using calorimeters and tracking detectors. The last remaining component of the particle’s coordinate, time t, has not generally been used to its full potential. A new detector to be added to the HL-LHC upgrade of the CMS experiment will measure time-of-arrival of minimum-ionizing particles (MIPs) with 30 ps precision. Two detector technologies are used in this MIP timing detector (MTD): crystal scintillators read out with silicon photomultipliers (SiPMs) in the central region (BTL) and low-gain avalanche detectors (LGADs) in the forward region (ETL).

The Fermilab group is a main proponent of the MTD for CMS and plans to build major parts of the detector, using novel technologies to assign precise timing information to each charged track, significantly improving physics object reconstruction and pile-up rejection at HL-LHC. As with other previously unexplored dimensions, these new detection techniques promise to bring transformative changes to event reconstruction and provide a powerful new tool for new physics searches in ways that were previously not possible. The MTD will improve electron, muon, tau, photon, jet, and MET reconstruction up to |η| of 3.0 by introducing improvements to the particle-flow reconstruction. Adding timing information at a resolution of 30 ps will achieve a performance level comparable to LHC Run 2, even at pileup of up to ∼200, which in turn enables data taking at 30% higher instantaneous luminosity than at the nominal pileup of 140 for HL-LHC. Thus, the effective integrated luminosity is proportionally increased and is equivalent to an additional three years of operation of the HL-LHC complex. The enhancements in charged lepton isolation efficiency translate into 20–40% increase in Higgs boson signal yield. The MET resolution is improved by about 10%, and the rate of jets spuriously clustered from pileup interactions is reduced by up to 40%. In addition, the ability to reconstruct the time of displaced vertices will provide enhanced capability in searching for long-lived particles (LLPs) and, in certain cases, permitting the reconstruction of the LLP’s mass.

Fermilab is playing a leading role in the R&D and design of the MTD and will host a module assembly site. A module is composed of the LGAD sensor bump-bonded to 4 or 2 readout ASIC (ETROC), which are then mounted on a support structure and wire-bonded to readout flexible circuit. Flexible circuits are connected to a Service Hybrid, which provide power to modules, and communicate with the back-end electronics. Members of the Fermilab group are leading the design of the 1) LGAD sensors, 2) the ETROC ASIC to extract the time of arrival from LGAD signals, 3) service hybrids to provide power and to read out ETROCs, and 4) design of the MTD detector modules. During the R&D phase the prototype sensors and ETROCs are characterized at the Fermilab Test Beam Facility. Detector modules will be assembled at the Silicon Detector (SiDet) Facility in collaboration with other US institutes. During production, modules will be assembled at SiDet and carefully studied to assure their high quality before shipping them to CERN for their final integration on the MTD support structure. 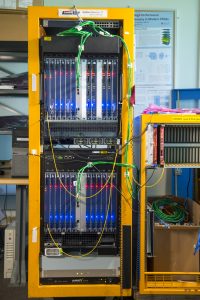 A test stand of prototype trigger electronics at Wilson Hall which tests the performance of FPGAs and their machine learning capabilities.

The CMS experiment is capable of detecting hundreds of millions of proton-proton collisions produced by the Large Hadron Collider per second. However, interesting signals, like those of the Higgs boson or possible new, undiscovered particles, occur in only a very tiny fraction of those collisions. The purpose of the CMS trigger is to filter out the vast majority of the uninteresting collisions and identify as many of the rare interesting collisions as possible. The CMS trigger is formed by two stages of filters, the initial of which is known as the first-level trigger and the latter of which is called the high-level trigger. The high-luminosity upgrade of the LHC will produce more more than a billion collisions per second, resulting in more than 10 times more data for scientific analysis. Using advanced field programmable gate array (FPGA) technology, the first-level of the CMS trigger system will have less than 12.5 microseconds to identify which collisions might contain something interesting to be considered by the higher-level trigger. To enable the first-level trigger to make the best decision possible while keeping the data rate at an acceptable level (less than 750 kHz), information from the CMS tracking detectors will be used together with sophisticated algorithms that attempt to match tracks with calorimeter and muon information and then remove particles that are not associated with the interesting collision. The CMS Fermilab group are leading the design of the CMS first-level trigger and are prototyping the sophisticated algorithms that 1) correlate information across different detectors, 2) remove particles from uninteresting collisions, 3) perform pattern recognition in the muon detector systems, and 4) make use of machine learning and artificial intelligence to improve the trigger decision. The High-Luminosity LHC will open an unprecedented window onto the weak-scale nature of our universe, and the upgraded CMS trigger will ultimately define the datasets that will be used to explore this new frontier in science.