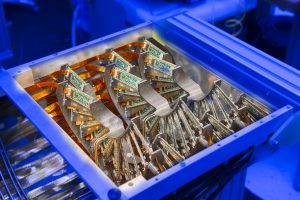 The superior luminosity performance of the LHC in its maiden run from 2010-13 led to the original pixel detector being exposed to very high radiation levels, thereby degrading its performance. The original pixel detector was therefore replaced with an ultralight pixel detector in 2017, as part of the Phase-1 upgrades. Several modifications were also made not only to handle the expected high radiation exposure and data rates, but also to improve the overall performance of the detector. For example, a layer of pixelated silicon sensors was added, and the innermost layer was brought closer to the collision point.

In total 672 pixel modules have been mounted on six support discs on each forward end of the detector. Each pixel module consists of 66,560 silicon pixels of size 100 x 150 µm2. The sensor uses n+-in-n technology to allow for high charge collection after the radiation expected in the LHC environment. The data from each module sensor are read out by 16 custom ASIC chip. They digitize the data, allowing for a readout speed of 160 Mbits per second. The buffers at the periphery of the chips to store pixel hit information are more than doubled with respect to the chips used in the previous detector. With these two major design changes, the data losses in the pixel detector are greatly reduced. All modules produced for the forward pixel detector were tested by a collaboration between Fermilab and other US institutions using environment-controlled test boxes at Fermilab’s Silicon Detector Center. Additional service electronics needed to assist in the readout were designed by Fermilab engineers and tested at Fermilab using a full readout system test stand built specifically for this upgrade.

Another significant contribution from Fermilab was the design and construction of the detector support. The lightweight carbon-fiber support structure was designed by engineers and machined by technicians at Fermilab’s Lab-3. The novel cooling system using on bi-phase CO2 was designed and tested using the cooling plant at the Silicon Center. Finally, the forward pixel detector was assembled and commissioned in one of the SiDet cleanrooms.

The CMS pixel detector was installed at CERN in spring 2017. It has successfully taking high-quality data since then. 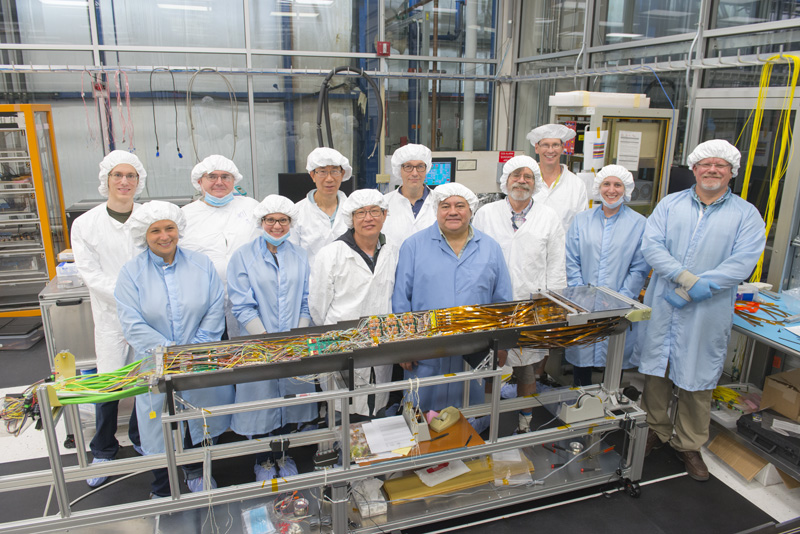 Some members of the Phase 1 Forward Pixel team with a completed half-cylinder, representing one quarter of the Forward Pixel detector

The energy of particles measured in CMS HCAL detector (in the form of scintillation light) has been diminishing over time owing to radiation damage from collisions. During 2014-19, CMS upgraded the photosensors and readout electronics of the HCAL with new silicon photomultipliers (SiPMs) and QIE11-based electronics with 5 Gbps optical links. This was the first large-scale installation of a SiPM-based detector at a particle collider. The HCAL includes almost 20,000 SiPMs each with an impressive 28% photon-detection efficiency, 8 ns pixel recovery time, and independent bias voltage control. The data readout is based on the Fermilab-designed QIE11 charge integrating ASIC. By using 16 pseudo-logarithmic ADC gain ranges, the QIE11 achieves a 17-bit dynamic range and 1% digitization precision with only 8 bits of readout. The QIE data is serialized and encoded with Igloo2 FPGAs and transmitted off the detector with 5 Gbps Versatile link optical transmitters.

The Fermilab group played a leading role in the upgrade: managing the entire project, developing the overall conceptual design, designing and producing the QIE11 ASIC and the primary readout board, as well as designing the SiPM bias and control electronics, which were produced by collaborators in India.
Top of page

The 2015 LHC run introduced an increased center-of-mass energy, from 8 TeV to 13 TeV, as well as higher amounts of pileup interactions.  In order to ensure adequate selection performance of the CMS trigger, it was planned to partially upgrade the trigger in time for the 2015 run, with the full Phase-1 upgrade to follow in 2016.

The main feature of this partial upgrade (Stage-1) was the replacement of the existing global calorimeter trigger (GCT) with production electronics intended for the full 2016 trigger system (uTCA cards mounted with more powerful FPGAs).

The upgrade team was a collaboration of US (Fermilab, UIC, Wisconsin, MIT, Rice) and UK (Imperial, Bristol, RAL) institutions. The Fermilab CMS group provided project management and algorithm firmware development for computing these new features in the new hardware. Our firmware engineers and postdocs implemented real-time pileup subtraction in the CMS trigger for the first time and helped with successful commissioning and operations for the 2015 LHC run.